As part of a continued project, to photograph Ospreys, I went to Scotland late last month (June).  I had booked a hide at the Rothiemurcus Fish Farm on the Rothiemurcus Estate at Aviemore in the Highlands – a birthday treat. The hide would be available to me from 5am until 9.30am and from 5pm to dusk. Don’t be mistaken by the words fish farm, these Ospreys are truly wild birds – it’s just that they have taken to fishing here in the pools and at the fish farm – well wouldn’t you, if you were an Osprey?  Over the years the birds have come to the Fish Farm to fish for their favourite food – Trout. The birds feeding here are a mixture of locally nesting birds, as well as those breeding at the RSPB Loch Garten reserve a few miles to the NE from Rothiemurcus.

Settling into the hide at 5am, the weather turned poor, not with rain, but the light diminished. As usual the BBC had given the promise of a sunny cloudless morning, which would have been superb – however, ’twas not to be, but as photographer’s you have to deal with the conditions you are given.  With the Ranger warding the incoming birds off the fish farm, they drifted down towards the Trout fishing pools. There was no particular wind blowing, which made it difficult to predict where they would swoop into and which direction they would take off in. The radio clicked, as the Ranger called a pair of Ospreys overhead of us – great news, but in a closed hide, the birds were difficult to spot, since any evidence of a human shape or face from a hide and they would be spooked. If you can spot a 6inch Trout from 100 feet, then you are going to see a pale human face poking out of the front of a camouflaged hide! So care was needed.

From nowhere  the first bird came in – it swooped down into the water on the far side of the pool from us – camera shutters clicked frantically, but it was clearly too dark for anything reasonable – 1/80 sec at f5.6 at ISO3200  not impossible with my 1D Mk3, but not ideal!  Maybe it was time to just watch them and study the way and direction they were feeding and i guess to just be in awe of their power and grace in the air.  Time sped along very quickly and before we knew it, 6.30am had passed. Fortunately the light was improving – I could now shoot at ISO 1600 !  As a bird was called, I had a feeling that it was going to drop in on the far side, so I set up for that position. From out of nowhere again, down it came at speed, splash, straight into the water. I could not get the entry as it was too quick for me, but this bird had gone right under the water and although shocked, I was certain it had not yet surfaced !

All of a sudden, up it came, just its head at first, drenched with cold Scottish water – peering out of the surface, like a submarine surfacing. 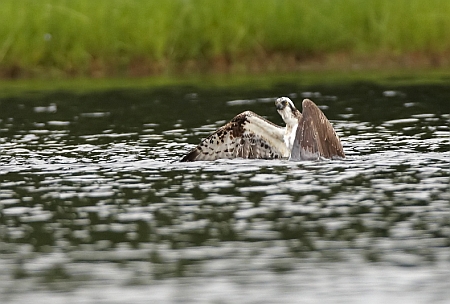 It looked strange, with its soaked wings just starting to appear from the depths. Up it came further to reveal its full body. 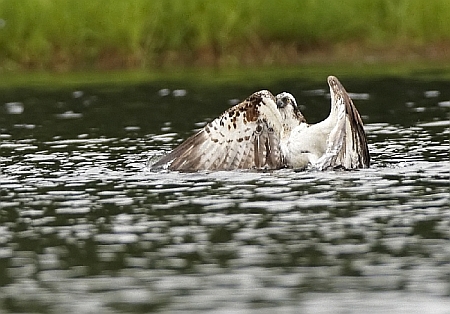 As the water ran off its feathers and it composed itself, I wondered what size fish it had actually caught – a large Trout, a monster Pike – it really was astonishing. Note that barely a few seconds had passed, although it felt like minutes. Down it sank again and I wondered if the bird was going to be able to “land” this fish after all! 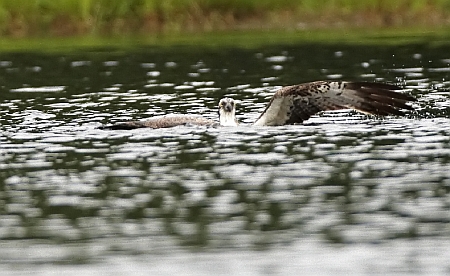 All of a sudden there was an enormous effort and the giant bird thrust its massive frame and wings and started to lift off the water. 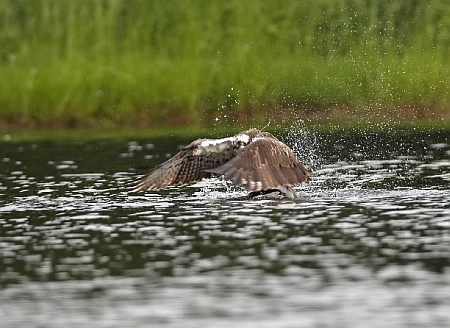 Up it came, its wings now poised to drive it upwards and its catch now revealed. 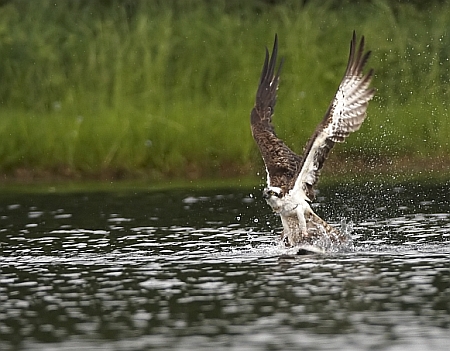 Down came the wings and drove this magnificent bird forwards with such speed from a standstill you would not believe it, had you not been there to see it. 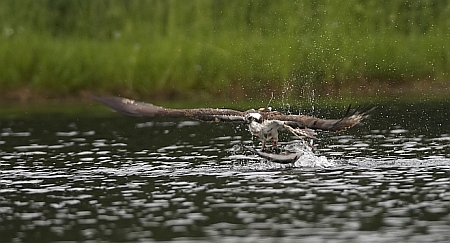 Not there yet, but the following images show the power of this bird and the skill with which they catch and hang onto their prey through this supreme effort to lift it from the water. 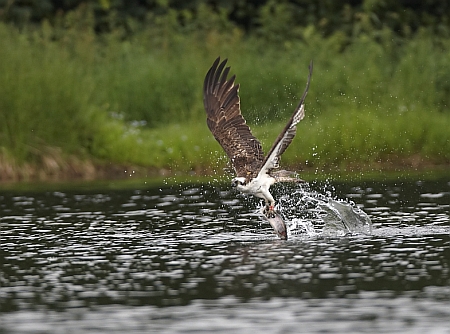 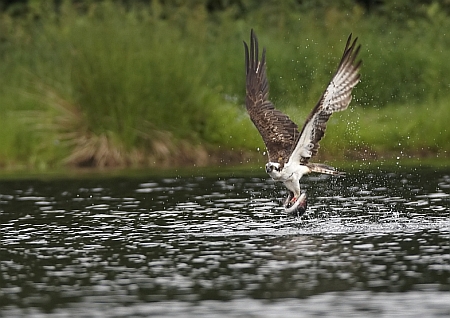 And there it was, up into the air with its prey, and off to feed its young. all of this action had only lasted 2 minutes, although it had seemed like 10 minutes. 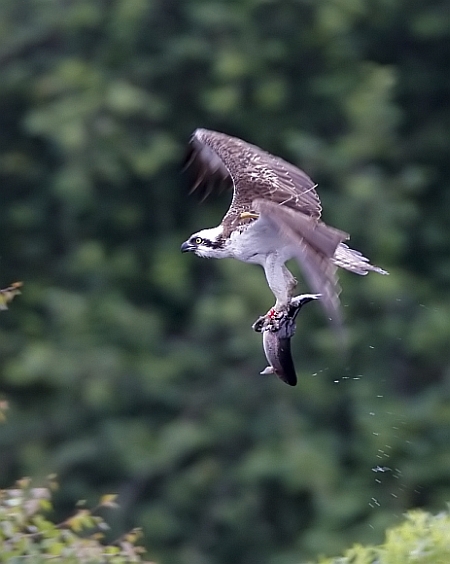 This bird had been radio-tagged and ringed – RED 18 – as yet I have not found out its origin or details.

The wait for the next piece of action was about 30 minutes, but this time the bird was so quick  – straight in and straight out – I was only able to capture its flight with its prey – magnificent! 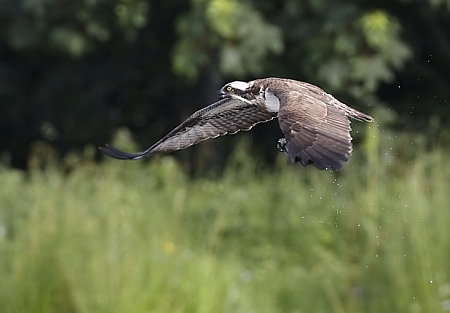 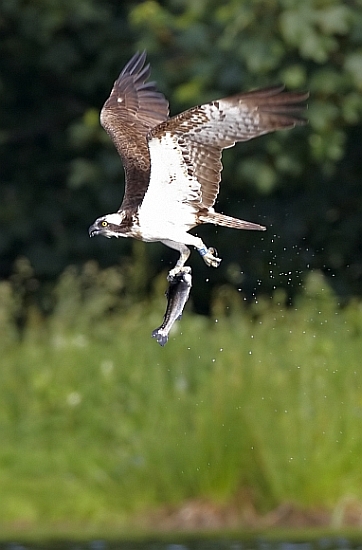 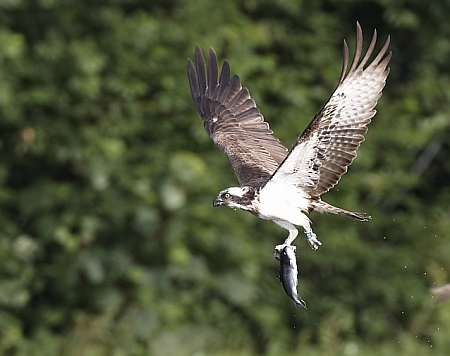 They continued to fish, coming in from all angles, mainly to the far side, but consistently taking off from right to left, into a slight NE wind. This bird I think is one of the Loch Garten pair – “Blue AH” – with a large trout for breakfast! 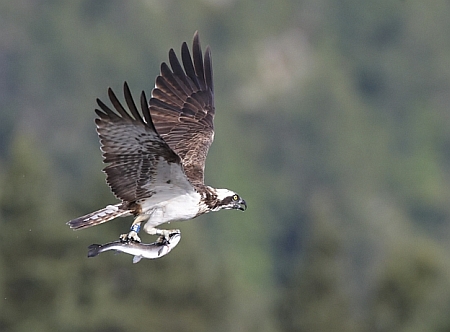 For me the thrill was to see the birds at close quarters, but was to capture the actual fish catch, then follow the bird out of the water and watch its sheer strength, as it lifts its prey from the depths. The splash of entry is phenomenal, but the accuracy is stunning. 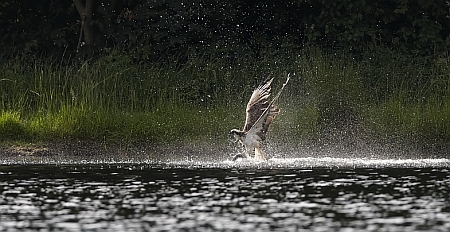 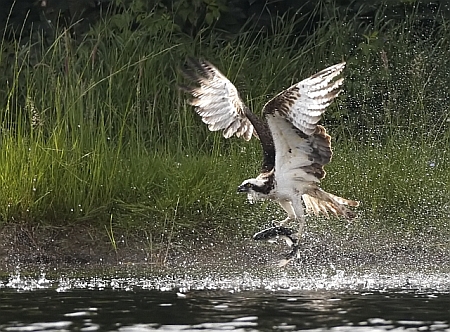 Well that was the morning over – time to vacate the site for the fisherman, after 4 hours of special time in the presence of a supreme angler and a beautiful bird.

The evening session came and was, I have to say, initially less productive, maybe due to disturbance from surrounding works, but as the evening drew in and quietness returned, back came the Ospreys for their supper.

This time they were stunningly back-lit, by the evening sun, which for me made them stand out from the surroundings more and showed off their power, as the water droplets glistened in the evening light. 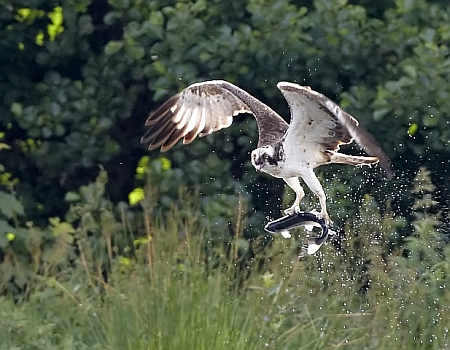 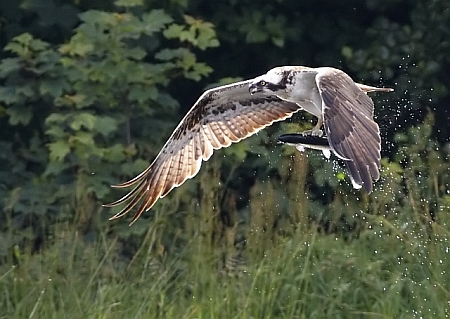 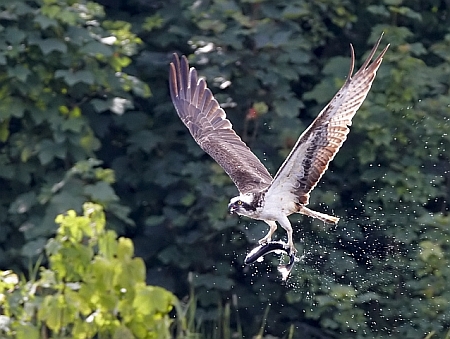 This was a very special day and it did not disappoint. So what it was an early start, but a small price to pay to see these superb birds at close-quarters. Being hidden in hides and viewing wildlife so close, is always a real privilege and one I never tire of. Over the day we estimated over 12 different Ospreys visited the fishing pools – not all fished – some just came for a chill-out on their favourite post, but they were all magnificent.

A morning and evening in the Rothiemurcus hides does not appear cheap at £125, but I would say this is well worth the money, as where else in Britain can you get so close to these master fishers. If you get a chance to see them, then book a slot between now and September, or go next Spring, for what will surely be a trip of a lifetime!