Having been gutted to have missed the Carsington Wryneck, due to work commitments, I was blown away by the text received from “Dipper” Keith, that another, or the same bird had been located at an estate in Heanor.  Finishing as early from work as I thought I could, without risking the sack,  I set off home to get my gear!

When I finally got there, I was met with the usual solitary birder, the rest having had great views of the bird – yep, it had departed and had not been seen for at least 30 minutes – just my luck!

To rub it in even more, one birder, who I shall call “Fred”, quoted the classic comment, “you should have been here earlier, it was in fact as close as 5 feet away and not at all shy” – thank you very much “Fred”.  He did wish me luck though and that was a nice touch.

Not to be beaten, I asked the local lads on their bikes if they knew where it was and sure enough, they said it had disappeared into some gardens down behind Buxton Green. The weather by now was, in typical fashion, deteriorating into poor light with continuous rain – don’t you just love British weather!  I sought to wander away from the cluster of birders now turning up, all regaling tales of previous Wrynecks and of Barred Warblers at Sumburgh and of Fairy Wrens down-under, on their last great holiday!

As I wandered down the road I saw what convinced me was the bird – a smallish brown-coloured bird flying across from a garden, then over the road, just like a Woodpecker would, with undulating flight. I rushed round the corner, but did not see it land. Following the road all the way round, I looked in the garden fronts, much to the bewilderment and probably the annoyance of the residents, although I did not once trespass off the footpath.

But I couldn’t find it anywhere, so walked back up to the top. No-one had seen anything and they were all still discussing previous birding achievements and not really looking for the bird which had brought them to Heanor in the first place. So i wandered down the road again, this time stopping off to chat to one of the locals, who upon receiving my description of the bird, told me it had been in his garden, he thought, but about 2 hours before – nice chap though.

I continued round the corner and met a fellow photographer, to whom I told I had thought I had sighted it 5 minutes previously, when suddenly we both heard a whistling sound from round the corner. Not knowing what the Wryneck’s call was, if indeed it had a call, I asked him what he thought it was, to which he replied, “it’s coming from that woman over the road, who’s pointing at the strange bird on her front lawn”! Well, to our surprise, there it was, on her lawn, as bold as brass!

Rushing over there, I got into position and fired some shots off. I thought should I break off this and go and tell the others it was here, but then thought, it may disappear whilst I was away, so I chose selfishness over gallantry. I did however, ask one of the young lads to bike round the corner and let them all know. It was in the longish grass and difficult to get a “full” shot of it’s entirety – but hey, I wasn’t complaing – this was my first Derbyshire and UK Wryneck – what’s there to complain about!

Enjoy the pictures below. 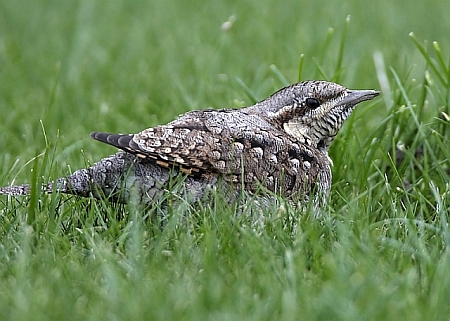 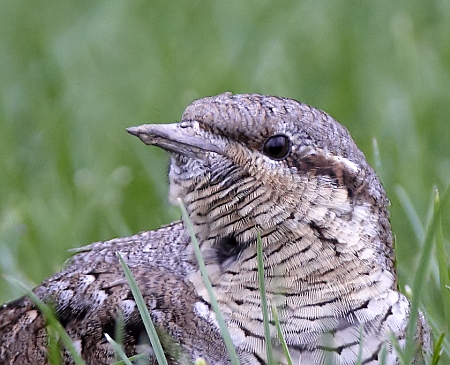 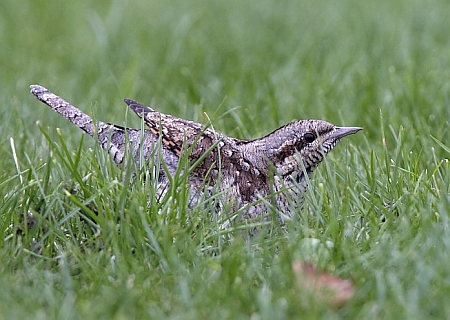 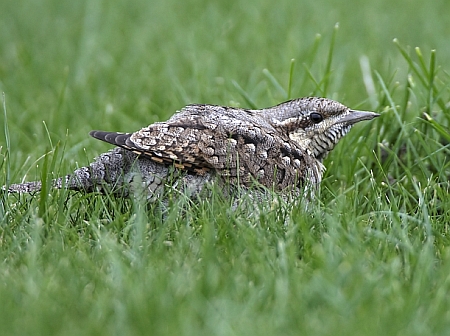 What I did see at Heanor as well, was the interest taken in the bird, from the local adults and kids. Let’s hope some of our enthusiasm rubbed off and that someone from there takes away a life-long interest in wildlife or birdwatching from this event.